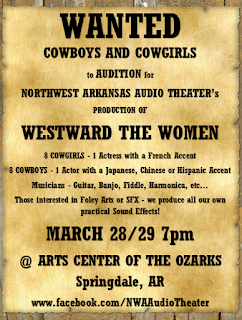 Posted by NWA Audio Theater at 3:06 PM No comments:

A "mail-order bride" situation, such as that in "Westward the Women", was not uncommon in the developing USA even into the early years of the twentieth century. Once the telegraph lines, the mails, and the railroads crossed the continent, it was fairly easy for people seeking mates to communicate and arrange for marriages, many or most of them based more on economics than romance. Farming and small town communities needed married couples to run enterprises, raise children, bring decency and order to the sort of towns which had not much of either. Men who were tired of living wild, women who wanted families, prostitutes who wanted lives with meaning and dignity, all were candidates for the adventure of mate-seeking at a distance.
The men in "Westward the Women" who put up the money for the wagon train to bring the women from the East were California settlers who found farming much more steady than goldseeking, once the dust had settled from the Gold Rush of 1849. Because so many men had rushed in from the East by themselves, there was a shortage of "good" women who spoke their language (the Mexican ladies, now Americans without moving anywhere since California became a state in 1850, being spoken for by Mexican men).
Conversely, the Rush had left a shortage of marriageable men back East. Many women who were widows, factory workers, domestic servants, teachers, or show girls wanted futures which would leave them with something to show for lifetimes of hard work....and maybe a little romance along the way, if they were lucky.
BTW: In this story, the ladies choose the men, not vice versa.
Posted by NWA Audio Theater at 12:28 PM No comments:

"Westward the Women" is based on many true stories, rather than one. Many of our ancestors were pioneers trying to find new and better lives; the rough journeys they faced included both genders and all ages. Although a wagon train such as this, "manned" mostly by women, would have been very rare, it would not have been impossible or even unlikely.
Overland journeys between Missouri and California in 1851 were unbelievably strenuous by our standards: no guarantees of basic necessities, such as drinkable water; no communication with the people left behind or waiting ahead; no Cavalry to fend off Indian attacks; no way to replenish supplies between outposts; no means or skills to fix broken wagons and other problems but whatever you had with you; no medical defenses against diseases or accidents. The ladies in our story had to learn to cope with all the hazards, doing for themselves what would have been considered "men's work" under other circumstances: driving mules, hauling water, gathering fuel, shooting back, and all the rest.
Incredibly, although many people died along the way, many more completed their journeys alive and ready for whatever was required of them to build their new lives in the new places
Posted by NWA Audio Theater at 5:12 AM No comments: